Posted on February 6, 2017 by brooklynvegetarian 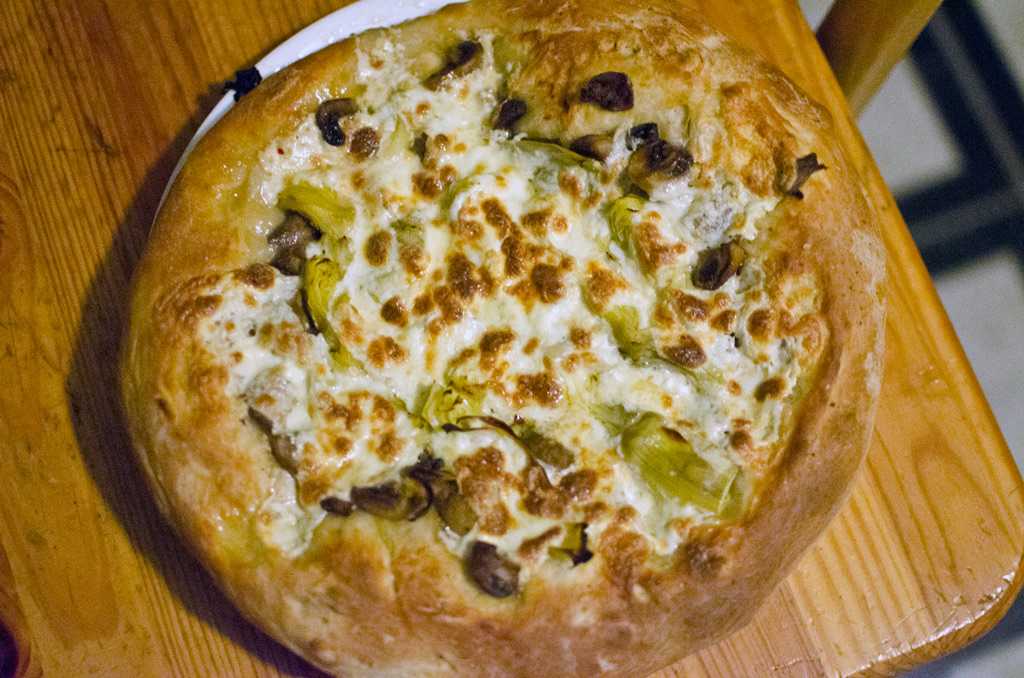 I’m friendly with some truly great pizza makers, so when it comes to making my own pizza I sometimes feel intimidated. Sure, I’ve tried before. More than once, in fact. But then I stopped for a long, long while. Then on a recent night my girlfriend suggested dusting off my cast-iron pan and make some pizza. And there was no need to make our own pizza dough, because there are several shops in the neighborhood that sell high-quality raw pizza dough for very little money. It was an eye-opening moment for me, and I’ve done it five times since then. My favorite version is pictured above, a white pie with mushrooms, artichokes, and truffle oil. Here’s how I did it.

While the refrigerated pizza dough warms to room temperature, pre-heat your oven to 500 degrees. Cut button mushrooms into quarters (or if they’re really large, more pieces) and saute them in olive oil with some salt and chili flakes until the mushrooms are cripsy around the edges. Turn off the heat and toss the mushrooms with some truffle salt. Drain a jar of quartered artichoke hearts, then rinse them and dry them off. Add a little olive oil to the bottom of a cast-iron pan and stretch out the pizza dough into it. Drizzle a little more olive oil on the dough, and then sprinkle some truffle salt on that. Add the sauteed mushrooms, spreading them out evenly over the dough. Then to the same with the artichokes. Place slices of fresh mozzarella cheese all over the mushrooms and artichokes, and make sure they are also evenly distributed. Drizzle a little more olive oil, season with some more truffle salt, and then put the pan into the oven. It takes about 25 minutes to cook all the way, but I usually check around 20 minutes in to make sure. The mozzarella should get slightly browned, the crust around the edges should puff up and get crunchy and brown like fresh bread. Once it’s done remove it from the pan, drizzle on some truffle oil, and let it cool on a cutting board for a few minutes. Then it’s ready to serve. The crispy crust, the creamy mozzarella, and the slightly acidic artichokes make a perfect foil for the rich mushroom ad truffle flavor. It’s so good that when I made it for for dinner my girlfriend insisted I make it again for lunch the next day. Hopefully you’ll like it that much too.

You don’t need truffle-flavored products to make a good pizza though. I made a pretty good one with Brussels sprouts and mushrooms (make sure you saute them before topping the pizza) and I’m starting to experiment with adding fresh ricotta after cooking. Just buy the pizza dough and experiment with ingredients that you like.

This entry was posted in cooking and tagged cooking, pizza. Bookmark the permalink.