Posted on February 19, 2018 by brooklynvegetarian 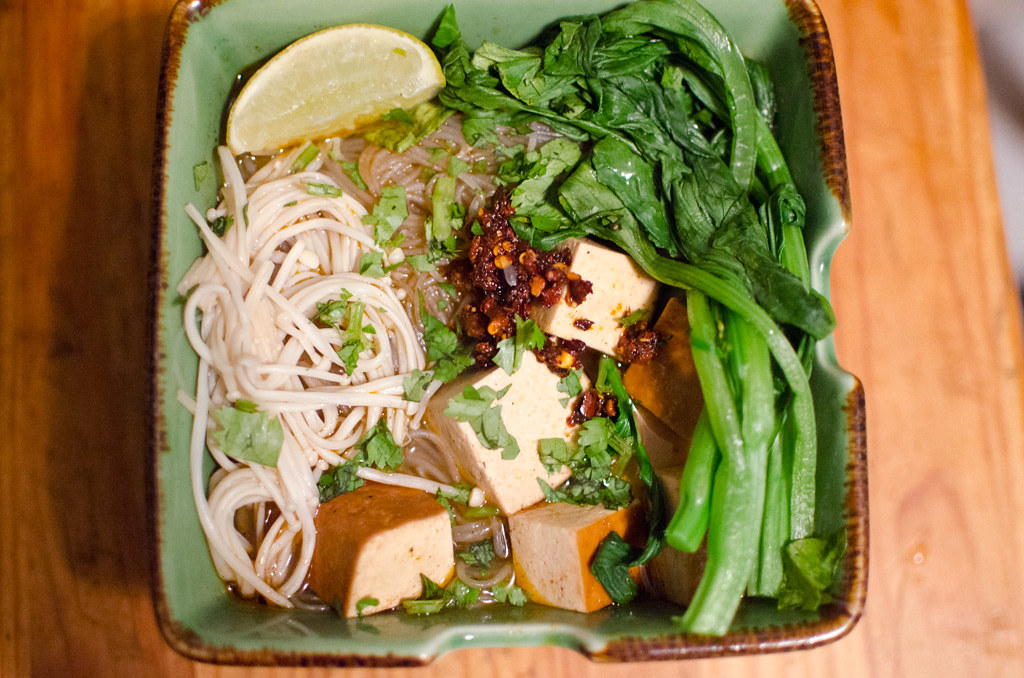 I have unilaterally decided that February is Vegan Soup Month. I received a lovely soup tureen for Christmas and with the cold weather I have been making a lot of soups. I came up with a a quick and easy vegan soup base made with dried mushrooms and sauteed onions (similar to my ramen soup base), and from that recipe I’ve riffed several variations. Throughout the month of February I’ll be detailing those vegan soup recipes here.

I went to Vietnam back in 2004, before I had a blog or knew how to properly research vegetarian food. I ended up eating a lot of great food, but I never did get vegetarian pho while I was there. The closest I came was one morning when the friends I was traveling with had pho for breakfast; our guide asked but of course the kitchen did not have any vegetarian pho. They sent a server out to get some bread and cheese for me, a very nice gesture. In the years since I’ve sought out vegetarian pho here in NYC, and although there are several places that feature it it’s not always great. So I decided to make my own.

Starting with the same onion/dried mushroom base from the udon post, I added chopped cilantro stems (save the leaves for later) and a small knob of ginger (smashed and chopped) to the sauteed onions. Then I added a small piece of cinnamon bark, a single star anise, a couple of whole cloves, and some fennel seeds. You can add these in a cheese cloth so they can be removed easily later, but I ended up straining the broth later anyway so I didn’t think it was necessary. I also added way more black pepper than I had before. After the spices had cooked with the onions in the oil for a bit, I added the mushroom soaking liquid, soy sauce, and a lot more water. I adjusted the seasoning, then brought the whole mix up to a boil and then reduced the heat, letting it all simmer together for a while. Traditional pho can simmer for hours, but there was no meat to cook and anyway I was getting hungry.

Meanwhile I prepped the garnishes and noodles. I blanched some enoki mushrooms in a little apple cider vinegar with a pinch of salt and sugar for some quick pickled mushrooms. They’re so thin and porous it only took a few seconds to infuse them with flavor. I set them aside to drain. I boiled some heavily salted water and then blanched some Chinese broccoli, then some firm five spice-seasoned tofu which I had cut into cubes.

By this time the broth had been simmer for a while. I strained the broth, then returned it to the pot and double checked the seasoning. I let it some back to a boil one last time, then reduced the heat again.

I blanched the rice noodles in the salted water, then put a small mound in the bottom of a bowl. I poured the hot broth over the noodles, then added the garnishes. I also squeezed some lime on top, some shopped fresh cilantro, and finally I drizzled some chili oil over the whole thing. I didn’t have any bean sprouts or basil, but add them if you have them.

The broth was rich and flavorful, the spices almost warming, and contrasted nicely with the acidity of the mushrooms and the lime. I couldn’t stop myself from eating two bowls.

Do you have a favorite vegan soup recipe? Leave it in the comments below.