Posted on February 26, 2018 by brooklynvegetarian 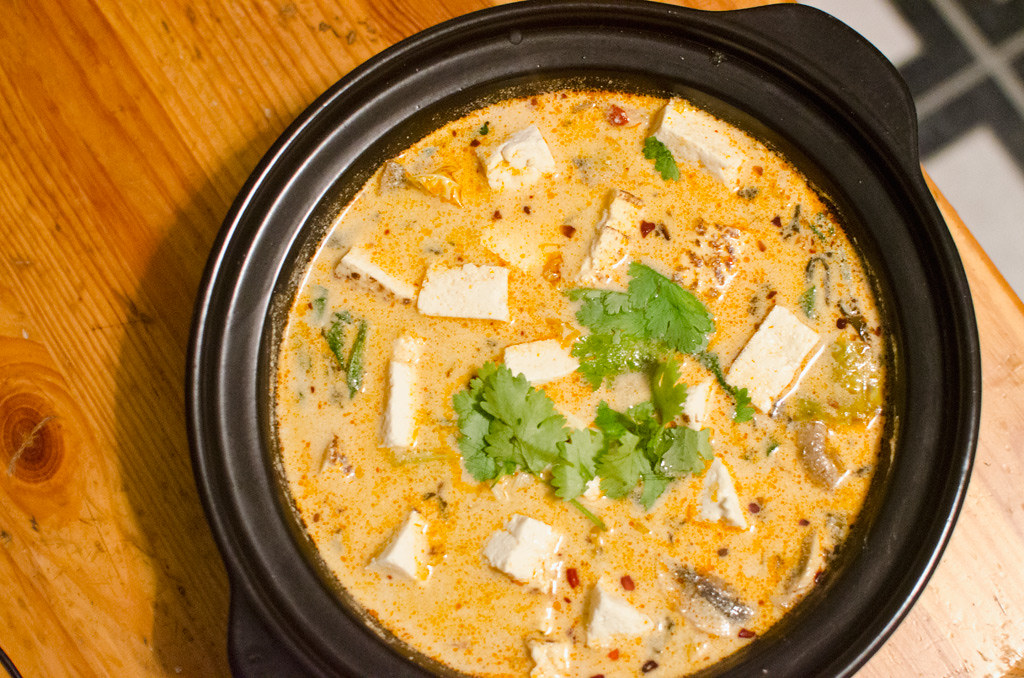 I have unilaterally decided that February is Vegan Soup Month. I received a lovely soup tureen for Christmas and with the cold weather I have been making a lot of soups. I came up with a a quick and easy vegan soup base made with dried mushrooms and sauteed onions (similar to my ramen soup base), and from that recipe I’ve riffed several variations. Throughout the month of February I’ll be detailing those vegan soup recipes here.

And so we’ve come to the end of the road. For my final entry in Vegan Soup Month I attempted the most complex soup of the month. In fact, it too a couple of tries and some specific ingredients to get this just right. But oh man, it was so good all of the work was worth it.

As always, I started with sauteed onions and dried mushrooms. While the mushrooms soaked in hot water, I sauteed the onions in canola oil with salt and pepper. I also added a couple of garlic cloves (crushed), some fresh ginger (chopped), cilantro stems (chopped), and a stalk of lemon grass (crushed and chopped), and let them all cook together. When they got super fragrant I added a generous splash of calamansi juice (calamansi is a sour citrus fruit, you could use fresh lime juice if you don’t have calamansi), stirred it around, then a large spoon of Thai chili paste made with holy basil (you could make your own if you want) I picked both of those ingredients up at Asia Market, I highly recommend them. Then I added the mushroom soaking liquid, a can of coconut milk, some more water, and seasoned with soy sauce. I brought this all up to a boil and let it simmer for a bit. Then I strained it, and added the strained broth back to the heat. I added some green savoy cabbage that I had cut into chunks and let them soften up in the simmering liquid. Then I added another dollop of chili paste and another splash of calamansi juice, just to brighten up the flavors a bit.

This brings us to the end of my totally made up Vegan Soup Month. If you missed them, check out the previous recipes: vegan udon noodle soup, vegan borscht, and vegan pho. I also made vegan ramen and vegan kimchi jjigae once upon a time.

Do you have a favorite vegan soup recipe? Leave it in the comments below.